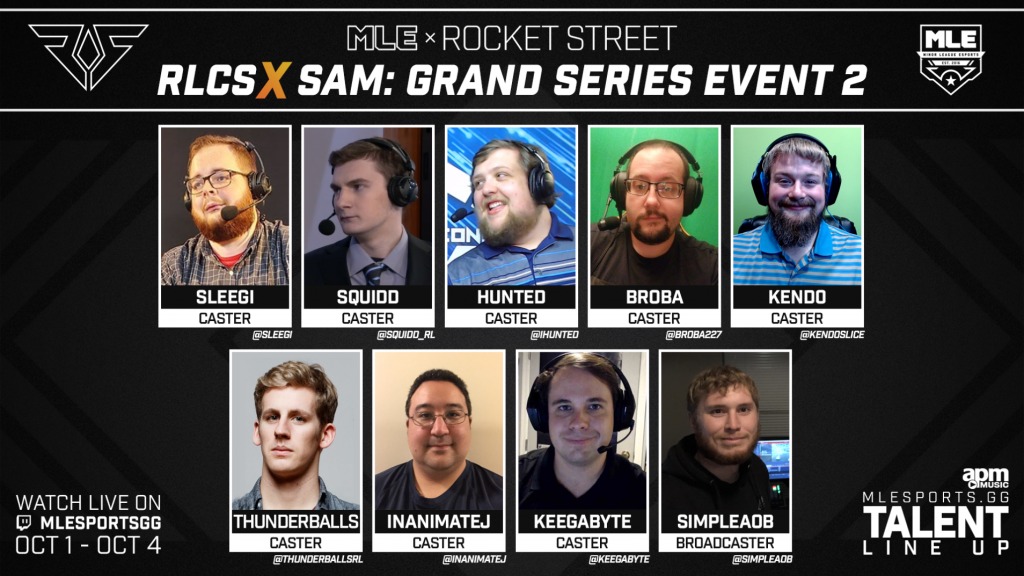 MLE has grown by leaps and bounds over just a few seasons. From two leagues with a small but devoted audience to five leagues, with a reputation among other minor leagues as being one of the most active and well-run communities. MLE now has another chance to show off its growth and professionalism to both old and new viewers. MLE is partnering with Rocket Street and South American professional Rocket League to bring viewers the English language stream of the SAM: Grand Series. This marks only the second time the MLE has partnered with the Rocket League Championship Series(RLCS). The first time RLCS and MLE joined together was way back in season 4 of RLCS qualifiers. The trajectory of the RLCS is not unlike the growth of MLE. As both leagues continue to grow and improve, it’s encouraging to see these types of partnerships emerge.

The SAM: Grand Series will be broadcasted on MLE’s official twitch channel and is composed of casters from the MLE broadcast team. This provides an opportunity for the hardworking members of the broadcast team to be featured in front of a broader audience. For casters like Hunted, it’s yet another step of a long journey from MLE caster to becoming a well-known figure of professional Rocket League streams. This is Hunted’s third time casting a Grand Series event. This series, however, will be the first to blend the worlds of MLE broadcasts with RLCS tier events. When asked about what this means for MLE Hunted said, “Personally, I’m excited that the top tier production team gets an opportunity to show the scene just how “grand” of a broadcast they can produce!”

For broadcasters like InanimateJ, who have been a staple of MLE from the early seasons, this represents a chance to show off the quality they have been helping to develop since the beginnings of MLE streams. InanimateJ, who started casting in season 3 of MLE, said of the event, “Just being able to be thought of as one of the top-tier community productions and given the opportunity to present such a high-profile event on our channels could open up so many doors for the community moving forward.”

For newer members of the team, the simple fact that the MLE is tied to an RLCS event is a huge opportunity for their budding casting careers. “My face is squarely planted on a graphic that has the RLCS X logo on it. If that doesn’t get a Rocket League caster excited, I don’t know what will,” said Thunderballs, who began casting for MLE just last season. Now he will get the chance to be featured on his first Grand Series event. And yes, that RLCS X logo will be featured alongside his face throughout the event.

The series represents a great opportunity for the MLE community as well. Fans have the benefit of being able to support the league’s twitch channel while also discovering a region of professional Rocket League they may not have watched before. Viewers may even find a new favorite team to root for. I myself am looking forward to rooting for a team called No Mercy Esports because among their roster is a player by the name of Droppz. Anytime I jump into an RLCS twitch chat people seem to be spamming their name, so I assume they must be a great player.

The Grand series will take place on October 1st through the 4th and will be streamed at 3 pm EST every day on MLE’s Twitch Channel. Be sure to tune in and show your support for the SAM: Grand Series, Minor League Esports, and the amazing broadcast team that has been such a huge part of what makes MLE great.