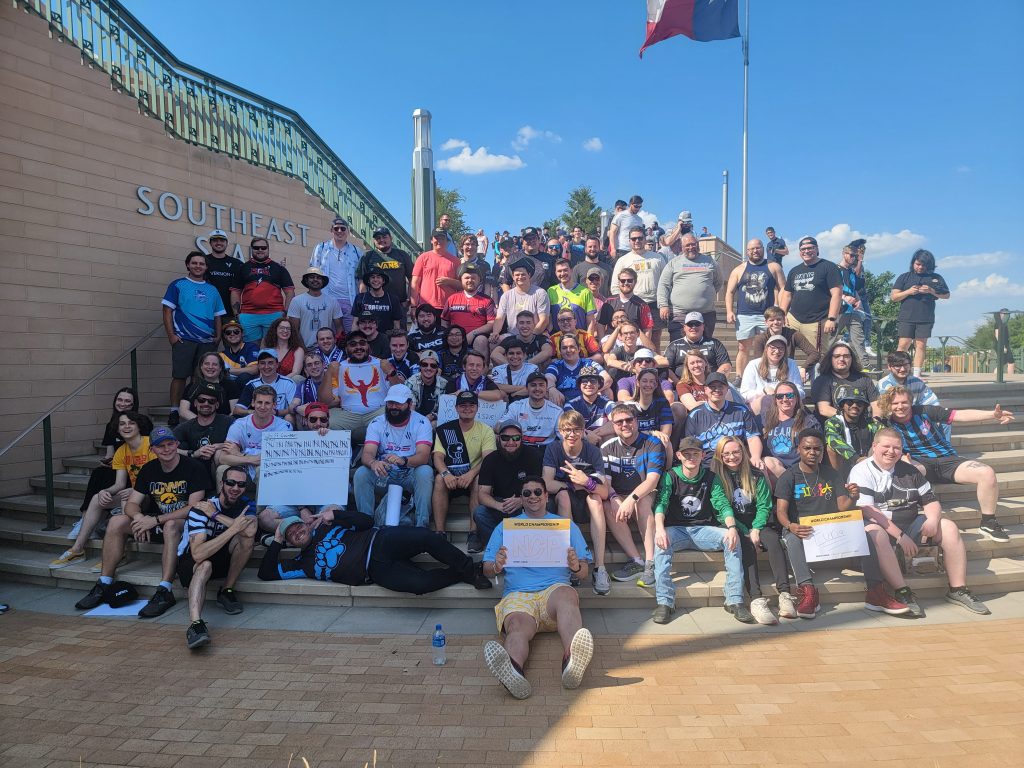 Unless you were hiding under a Rocket League inhibiting rock last week then you were probably aware it was the Rocket League Championship Series World Championship (RLCS Worlds as the cool kids say) in Forth Worth, Texas. It’s the jewel in the RL Esports calendar crown, an event that always offers up plenty of action and excitement. This year was no exception!

What made the event even more special is that it was the first World Championships post COVID. With that in mind you could count on swathes of RL fans across the globe making their way to the state of Texas come hell or high-water!

With such a passionate, RL loving community of our own, Minor League Esports was well represented with a plethora of community members in attendance. We thought we would take this opportunity to provide the perspectives and experiences of some of our members who were able to attend.

For a number of our community members, such as BoogerBear (Shadow), Royalty (Express), iAtomic (Sharks) and stoofy (Comets), RLCS Worlds 22 was their first RL event. AnOddFellow (Tyrants) was unsure about what exactly expect“I had never been to anything like this before so I wasn’t sure what to expect other a lot of Rocket League fans and seeing content creators and players wandering around.” Hey that doesn’t sound like the worst way to spend your time. Others, such as Zack (Bears), had a bit more experience in terms of live events, “I’ve been to a few CRL tournaments, but this was my first RLCS.”

Plumato (Lightning) knew what he was looking forward to, “I was very excited to watch another LAN and get the full experience of a world championship for the first time (I was going to go to RLCSX which got cancelled). I was definitely looking forward to seeing some insane gameplay from the up and coming teams such as Furia and Falcons.” But arguably the MLE community member with the highest expectations for RLCS Worlds was Guchu (Hive), “This was my first Rocket League event and I expected to go to the event and then go back to hotel and be done with the day after everyday.”

Regardless of whether this was their first event or not there’s no doubt everyone was excited for the World Championships.

There were a total of 24 teams that competed across Worlds but who were our community rooting for? Some, like Plumato hedged their “bets” when it came to their support, “Version 1, SSG, Furia, Moist, and Endpoint. I like to keep my options open so I’m not too upset if my favorite team loses.” But there were a few teams in particular seemed to be quite popular amongst MLE attendees, “I was supporting NRG and Furia” said Royalty. BoogerBear was also in support of Furia amongst others “FURIA, Falcons, KCP. Minor regions are insanely fun to cheer for and are finally catching up to the NA/EU skill level” and Zack also jumped aboard the Furia hype train “Furia definitely won us over!” he exclaimed. Indeed Furia were definitely one of the talking points of RLCS, the first non NA/EU team to reach the semi’s of RLCS, representing South American Rocket League Esports fantastically but falling just short at the semi-final stage to eventual Champions Team BDS.

Sticking with Furia and looking at the highlights of RLCS, their rise in popularity could somewhat be attributed to their Quarter-Final series vs Moist Esports in which they edged a game 7 decider in dramatic fashion! benven (Dodgers) was in no doubt about their favoruite moment of the championships “Furia beating Moist for sure.” A sentiment echoed by other MLE community members “Furia vs Moist Quarter-Final match. That was the best series I’ve ever seen live.” said Zack and stoofy, definitely had no doubts about his favoruite moment, “Furia upsetting Moist in Game 7. Paully, Rolamin, and I were jumping, hugging, and screaming when Yan put the dagger in Moist. That entire series was bonkers. Easily the most electric moment I’ve ever been a part of.” It’s believed Paully and Rolamin are still recovering to this day.

One MLE member, dad (Spartans), offered a more tactical perspective of Furia and the match, “My favorite part of the event was watching how Furia was able to adapt their play style so well based on which team they played against. Wether that meant they could play their relaxed rotations and high mechanical plays or such as against Moist being able to tighten their defensive rotations and catch Moist out of position.”

While the Furia vs Moist series was unequivocally the highlight of the Championships among many attendees for others their highlight was, well all of it “There was no one favorite moment, it was all an incredible experience.”  says AnOddFellow. I imagine the vast majority who attended wouldn’t disagree with that statement.

But events like RLCS Worlds aren’t just about the gaming action, no they are an opportunity for people to make memories. Catch up with friends or make new ones. Perhaps even get a significant other invested in a passion of yours like benven did, “Personally, (my highlight) it was that my wife got super into it after dragging her all the way to Dallas.” he said, “Even found her checking out the esports subreddit and she remembered all the players names and everything. It’s now something we enjoy together!”

For many in the MLE community RLCS represented to meet in person the friends they had made in MLE “I met Adi, Raspberries, Miss Ginge, Water, TheBigC, and others from MLE (I think we had a table of 15) at this Korean BBQ and it was so much fun.” said iAtomic making this writer now want Korean BBQ food.

RLCS for goyo represented the perfected opportunity to meet one of his long-term online friends in person,“One of the highlights was meeting lots of people that I have known for years online. Tater was one of them. It was great to finally have a face to his name and give him a big hug. Dude is a legend.” Guchu (Hive) also got all emotional on us regarding their personal highlight, ready the tissues folks, “Getting the big group picture. When we were all lining up for the picture it just kind of set for me, this truly wasn’t just a community about a video game, it was a community that made me feel like I had a second home.” I’m not crying you are.

RLCS also presents a great opportunity for people to meet and mix with famous people within RL Esports scene and for some community members, these moments were their personal highlights. stoofy was able to pounce on fan favourites Furia, “It was surreal meeting Furia as we were leaving the arena and getting to take a Comets x Furia style picture with them.” he said, adding “Great dudes, I wish them the best!”  AnOddFellow donned on his best swim trunks“Going to SunlessKhan’s Pool Watch Party the last day of groups and just mingling with pros/content creators/casters/friends I’ve never met in person before.” Anyone else want to namedrop? Oh go on iAtomic what/who you got for us? “Another highlight was me speaking to kronovi when he was at our AirBNB for a party and we spoke about Content Creation for half an hour.” Kronovi? Never heard of them. They play psychedelic rock or European electronica? Jokes aside (call them jokes?) the MLE community certainly had a memorable time.

So as the remnants of ticker tape have all but been cleared from the Dickies Arena floor it’s left for our community members to provide their final thoughts. “It was a blast. I would do it again in a heartbeat” said BoogerBear, “9/10 I had a fantastic time would go again” emphasised Guchu… only 9/10? tough crowd…  “10/10.” said goyo, that’s more like it! “Practically it’s the best experience I could ask for as a Rocket League fan and would most certainly do it again given the chance.” says Royal who’s positivity was mirrored by dad’s summary “I loved the experience. It was a chance to meet people in person that I’ve played with for a long time and meet others that I’ve played with for a short time. I would 100% go to another RLCS event!”

Pretty much everyone was glowingly positive about their overall experience though benven did have one criticism “I loved it but the last day was WAY too long.” benven is now no longer permitted to attend any RL LANS but his wife still can. stoofy definitely had a good time though “Absolutely insane! Despite spilling vodka on my head trying to do one of B++’s waves on my first day, I’d say this was genuinely one of the greatest experiences in my lifetime. I’ll 100% be coming back for more LANs.” I wonder if he ever perfected B++ wave (please note B++ wave must not be attempted at home and can only be safely performed by trained professionals).

There’s no doubt the MLE community will be out in force at future RL events and that is something we can all agree can only be a good thing. A big thank you to anyone who attended RLCS Worlds from the MLE community and who represented MLE & it’s community in the way it should be – friendly, respectful and passionate. Also big thank you those who have contributed to this article with their quotes, experiences and photos. Without the community there is no MLE. Here’s to next time!

Here’s some more photos of intrepid and wonderful community members at RLCS!