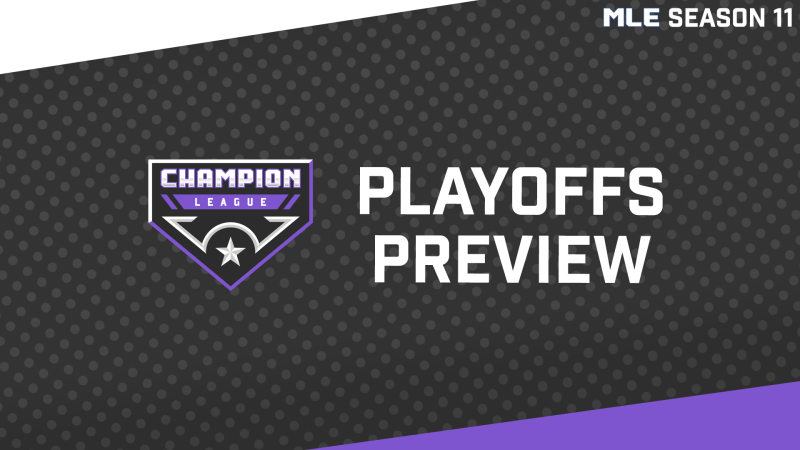 There are upsets galore as the competition in the Champion League playoffs heats up. The Conference Finals promises more high-level plays and even more tightly contested matchups. Can one of the underdog teams take this Cinderella run all the way to the league title or will the top seed take the day and prove why they were the number one from the beginning? Lets take a look at what’s in store for this round of the Champion League playoffs.

When the Elite are on form, it seems like nothing can get in their way. Their offensive playmaking and shooting ability are at the top of the Champion League. Mushu and PANDAmazing combined for 20 goals on 34 shots in the back and forth series. The Demolition seemed to give the number one seed a tough challenge, however. The Demo took two games off the Elite and appeared in game four to have their number. The Demo met every challenge from the Elite and simply gave them no space to set up a play. When the game came down to defensive play and winning challenges it seemed to go to the Demo. In game five the Elite were able to find space again and get the 4-3 overtime winner. Give the Elite the opportunities and they will make the play every time, but if they want to win the championship this season it seems that the Elite will have to work hard to make the space themselves. No team left in this bracket is going to give it to them.

The Tyrants hit their stride against the Comets in the Orange Conference Semi-Final. We knew that this team would be aggressive and push up for the challenge. What the Comets were perhaps not ready for was the speed of this Tyrants team. The Tyrants constantly caught the Comets upfield and punished on a counter-attack against the one shadowing defender. The way TSR and Trusolja were able to transition offense to defense proved lethal in this four-game series. They stumbled a bit in game two when the Comets brought on shot after shot to keep the Tyrants on the back foot. But the Tyrants are a team not to be shaken. They continued to play solid both offensively and defensively and capitalized on their opportunities. Trusolja was the MVP of the series with 8 goals and 11 saves on the series but what makes the Tyrants so lethal is that both players have the potential to pop off in a series.

This season’s playoffs has proven to be the most unexpected in MLE’s history. Not one but two Conference Finals has a 6th seed matching up against a 7th seed for the first time. But when you break down the Sabres and The Hawks you can see why these two teams have talent that far outweighs their low seed.

The Sabres have the mechanical ability that can burn you individually. But What I like about the Sabres is their team chemistry and awareness on the field. Every time the Sabres have the ball they seemed to slow the pace down and assess where their space was while other teams would be tempted to race into the defense and take the 50/50. Both players not afraid to take to the air with the ball but often sought to work the backboard and trust their teammate for the cleanup. Lil Lettuce has been a key offensive player throughout the season but accuracy plagued them throughout the season. But Solrak came in clutch and was able to finish off enough of the plays that lingered in the offense. The Sabres dropped games two and three due to missed opportunities but were able to put enough home to secure the win. If the Sabres want to make the final they will need to execute more of the same but with better shooting accuracy.

There are two things I know about Orange Monkey, they play their MLE matches in a Merc and their dribbling and flicks are some of the most lethal in their League. It was those very flicks that won them an AL championship title for the Hurricanes in Season 10. You can see that the Hawks have embraced Orange Monkey’s style. Most of the series versus the Puffins was a back and forth battle of two teams trading dribbling plays at a supersonic pace. But after two seasons of this style, it seemed for a moment the Puffins had caught on to their opponent’s tactics. As many times as Orange Monkey’s flick burned the defense, they also got challenged early and had to rush back to the defensive. The most lethal attacks from both sides came from aerial plays which burned the boost of these two great defenses. KillingHabbits proved to be the X-factor in this department as they often elevated the ball to keep the Puffins on the back foot.  But it seemed to take the Hawks till game four when they changed their pace and let the Puffins take the offensive that they took control of the series. They focused on winning defensive challenges and striking from the counter-attack which produced results immediately. They finished out game five in a dominant fashion. This team has a polished offense but can turn to their defense when they need to. That could make all the difference as they face off against the high powered offenses to come.