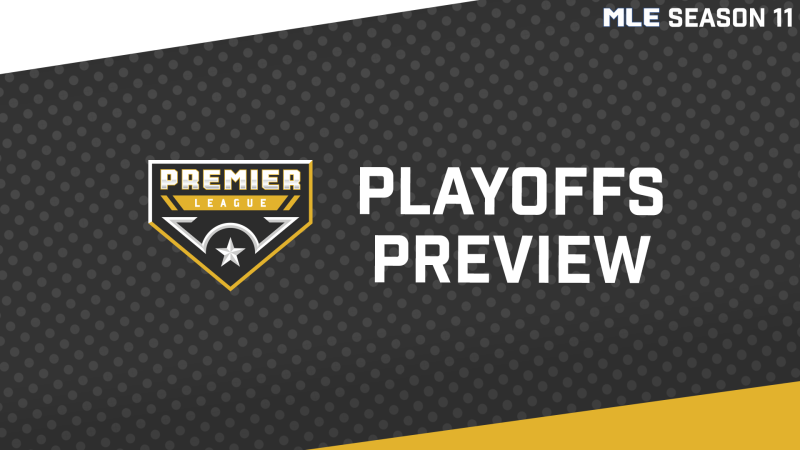 The first round fo the new Premier League has finished and the Conference finals is about to begin. Four teams remain and the Talent level of each player on the field is higher than we have ever seen in MLE. Who will rise above the other and prove to be the best? Let’s talk through the contenders as we cover the Conference Finals of the Premier League playoffs.

The showdown in the Tropic Division was a great match to watch last weekend. As promised TrashVan and BraidedAxe had their fill of highlight plays. Danger and Trashvan took to the air in game one. The Shadow had to win in overtime with a very defensive style of game. In the second game, the Sharks kept coming and managed to shut out the shadow and tie the series. In game three, it was perhaps the Shadow that smelled blood in the water. Both players seemed to make a conscious effort to speed up the pace of play and a back and forth game commenced. Every time the Shadow came down with a stellar play the Sharks would have a miraculous save right at the point of the shot and answer with their own attack. Both teams raced back and forth for just shy of eight minutes before the Shadow got the OT series winner.  What we expected in this series was for Braided Axe to be the playmaker for his team but what has perhaps been the storyline of last week was just how well Canadiyan is playing under pressure. If both players can keep up the level of play they showed in shutting down the Sharks they have a decent shot at an upset this week.

On the other side, the Bulls seemed to have an easy time with the Elite. In a dominant 3-0 sweep, there was never a doubt that this was the Bulls series to lose. Comp and Deluxe mechanical abilities seemed to be a great fit. The pair combined for 15 goals in just three games. Often times it was Deluxe making a play to set up Comp or just beating both defenders and allowing Comp to clean up. But it seemed on both offense and defense the duo outclassed the talents of the Elite. With Comp coming back to the league late in the season and Deluxe putting up top numbers throughout the season it seems we are only now beginning to see the top level of what the Bulls are capable of. That’s a scary thought when you see the numbers the team was putting up without this top lineup. It’s hard to bet against the Bulls at this point with just how good they look. But each match will be a new test and Each of the three teams left is hoping they have an answer to the style of play that these two players bring to the table.

The Shadow stepped up big in their match against the Sharks, but now they perhaps face the toughest test of the tournament. Both players will need to bring their best game against the Bulls. I’m not saying that the Shadow can’t overcome this dominant Bulls duo. But if you’re looking for a long shot in your pick’ems this is the one.

First, we should perhaps address the orange and green elephant in the room. The Eclipse moved through to the conference finals by way of the Hurricanes not making the match and handing their opponents an NCP. This was unfortunate for the fans and for the Hurricanes Franchise. There is not much more to say about the Eclipse after last week’s preview. The team is fast, accurate, and was surely capable of taking the series had they gotten to play their match. They will no doubt be scrimming and continuing to keep their eyes on the prize of taking home the first PL Championship. Expect them to come into this weekend’s match looking to prove that they would have won their first round no matter what.

For the Wolves, they did have to play a match last weekend however it looked to be business as usual rather than the trial that was expected. A comfortable 3-0 sweep for Taki and Lotty Lettuce, that seemed to go exactly how they drew it up.  The Wolves took the series thanks to rotational play, defensive awareness, and accurate shooting. It was a series largely won in the midfield with both teams not making a lot of mistakes nor committing to too much offensive pressure. But when the Puffins did present threats against the Wolves net it was Taki who came in clutch with 11 saves over three games. Lotty Lettuce was of course an expected offensive force with 8 goals on 14 shots. Nothing about the Wolves’ win seemed overly flashy and they didn’t lean toward any specific style of play but it appeared that they didn’t have to. They played with the composure of two players in a casual lobby just doing what they do best and mixing up their approach from time to time.

This Conference final might have people guessing because I believe both teams haven’t shown their full hand just yet. Look for this match to go to the team that comes out hot and sets the bar higher than these players have had to play so far these playoffs.