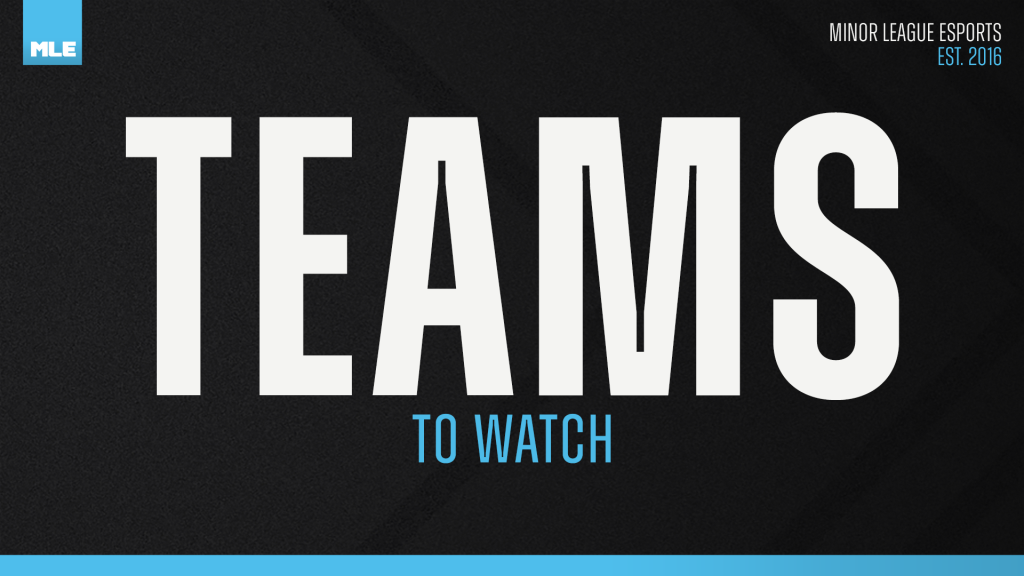 Ok, so they might not be the best that MLE has in terms of technical skill. But, as you look deep into the Foundation League you might find that there are some of the best and biggest up-and-comers.  That being said, it’s time to look at the Teams to Watch for this great Season 12.

This prediction might not be as bold as others, but especially after their performance in week one, they are probably on most people’s watch list. While it might look at first glance like the entire Hawks team is high salary (44.5 total), a look at the Pandas for instance (43 total salary) shows that they aren’t too far ahead, and after the Pandas 0-5 loss it just goes to show that there is some skill hiding in the Hawks ranks.

Now it is easy to say that they had close games and might not be as good as a 5-0 win looks, but when we dive deeper into their scrim stats, we see a different story. They have all three players in the top 25 for avg MVPR! This out of a stonks sheet with 238 rows of players.  In terms of win percentage that changes to 2 in the top 50 and the last in the top 100, but if you ask me scrims aren’t the same as playing with your team and the lowest win pct for them individually is .5 so still better than half of the Foundation League. So put all the pieces together and I think you will likely see a strong Hawks team all the way to the playoffs this season. That’s as long as they are ready to handle a rank out or two.

On to the bold prediction for season 12.  Now I say this is bold because they don’t have the highest salary, and they didn’t go 5-0 week 1 but hear me out. As we look into the draft and see they didn’t take a 10 salary as their first pick in FL, we see a team that isn’t afraid to sport some lower salary players and is looking for them to improve but hopefully stay in FL and carry the franchise to a season Championship.

Let’s talk about their match.  They headed in with a lower total salary against a team manned with players who have been to AL just this offseason, and a solid retention in their team captain.  Not only were they able to pull out 4 wins and clinch the series but they joined the elite group with the Hawks where everyone on the team had an assist proving that they are really meshing and already a team. Looking at scrims paints a picture of some true sleepers as the team leads off with an avg MVPR of 3.69, which is higher than 2/3rds of Foundation League players! With all players sporting a .5 win percentage or higher, they once again join the likes of the Hawks. Lastly, they bring home a top 10 4mans player, and their #1 draft pick, Jacobjtl, has yet to miss the playoffs on his teams. With plenty of room in their salary cap at 41.5, they should have plenty of room for their players to progress and I expect they will go far.

With the easy choice, we see the Hive move up to the top of the leaderboard, The reigning FL Champions are proving they have what it takes. The Hive, keeping with that bee family mentality, appear to have built a team that is as sweet as honey! Once again going with a low salary draft in pick number 2, they have proven why so many tryouts were crucial.

Circling around to the match, the Hive was another team that was way out salaried but this time they sweep with a combined 21 goals. They turned, what by their salary should have been a loss into a lock. I won’t call it a shut out but when you almost double your opponent’s MVPR it’s something to write home about!  Moving into the scrim bot, we see an average win pct of .64 which puts them so far ahead it doesn’t even bring you to sheet 2 of the stonks card. I think they really shine in the goals per game slot though, where we see one player 2nd in FL and the other in the top 50. Proving match 1 was not a fluke these players do it every time they drive on the field.  Not that it will be a surprise to the community but I expect you might see this team in the announcements as back-to-back champions.

Were there teams that had more wins? Yes. Were there higher MVPRs? Yes. But this pick is all about hidden talent. In terms of their week 1 performance, we see what some might say was an average performance. But let’s dive deeper, 16 combined saves, 4 or more goals scored in the games they won, and an avg MVPR of 4.23! Showing that even though it took to game 4 they are close to end-of-season form.  When we look at each player’s scrims we see one player in the top 20 of almost every category from goals per game to assists. The best part, the other player is in the top 50% for the other category (saves per game). Proving that the best thing about the Wizards isn’t a single player but their ability to build a TEAM that compliments each other and makes up for the weaknesses they might have. Their only weakness could be a rank out, but looking at their drafting mentality, even with a rank out or two you might find yourself yelling “Go Wiz” by the end of the season.