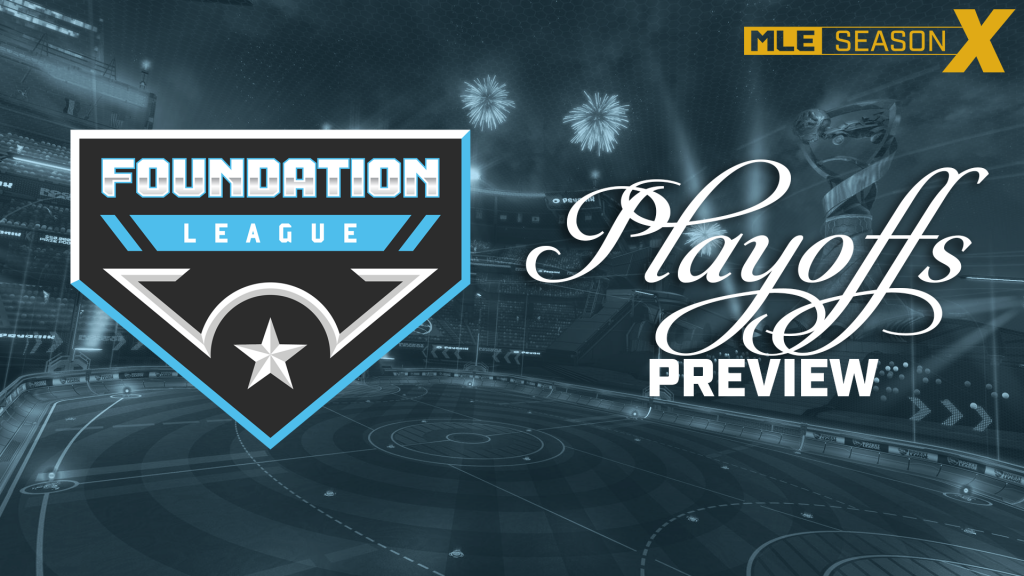 The Foundation League is in its third season and even though the level of gameplay isn’t Grand Champ, the desire for a Championship is just as strong. Which teams will fall short and who will rise to the challenge? Who will make the glorious run and win themselves an MLE Championship? Where will I decide to include the single pun that I am allowed to use per my very detailed contract with MLE? To help you get geared up for another thrilling weekend of playoffs I’m back to break down the teams and tell you which players to watch out for as eighth Foundation League teams make their run for the title.

Express (Blue Conference 4th seed)
With a 5-5 series record and a -14 goal differential, this Express team enters the postseason as the clear underdogs. But the nature of the Foundation League means that player turnover is likely and the introduction of new starter JoKEN could give the team new life in the playoffs. After the rank out of leading scorer Kenbennedy, The Terminator, who is averaging 1.3 saves a game, is likely the new star who will have to lead the team. Look for this defensive player to hold the backline as the Express aim to surprise a few FL front runners.

Bears (Orange Conference 4th seed)
Putting aside the stats, the thing the Bears really have going for them is a great storyline. In the FL draft, it was revealed that the Bears successfully drafted the first father-daughter duo in MLE. Cardinal and HyperFangHyena have since been building up both fans and wins with the help of their solid third in KaptainKillazz. HyperFangHyena does lead the team in scoring with 1.4 goals per game and has an impressive 51.04% shooting percentage over 35 games. But if you’re looking for an x-factor, the answer is in the family synergy being the reason this team could clutch out playoff wins.

Blizzard (Blue Conference 3rd seed)
Some FL teams are the product of a season-long campaign of stalwart play. For teams like the Blizzard, it’s always about the next man up, as rank outs result in turnovers and new starters taking up the mantle. Face and ItsGoguts joined in the middle of the team’s campaign and have gelled nicely with Audacity to create a well-rounded team. But as this team continues to battle into the playoffs, look for Face to be the emerging star. They’ve already managed to rack up 39 goals over 20 games, proving to be an offensive cannon that can be the difference-maker in the postseason.

Outlaws (Orange Conference 3rd seed)
The first of the returning champion teams in the playoff hunt, the FL Outlaws boast the first-ever FL champions title. Like true Outlaws, this team is attempting to steal back the title and bragging rights for the best Foundation team in the league. The team is led by the well-rounded captain OuttaBoost who averages 1.7 goals a game and 1.8 saves per game. At 1.7 goals a game, Hoosier_Daddy23 will likely be the other half of the duo. Not only are the two players 2nd and 3rd in the league for scoring, but they both also have at least 50% shooting on the season. We don’t know if the title will return to the Outlaws this season, but we do know they have the weapons to challenge any FL team.

Hurricanes (Blue Conference 2nd seed)
When it comes time for playoffs, most MLE teams can be assessed by the star players that will show up to carry their team to a championship. But the Hurricanes have built their season around the three-headed hydra that is Stanless, Bomnin, and FROGDOG. With a 3.97, 4.46, and 4.25 MVPR respectively the Hurricanes roster has turned out to be one of the best teams top to bottom in FL. While this has served them well throughout the season, will their lack of a high scoring star be a hindrance to them come playoff time? Other teams will be leaning heavily on their best player to come in clutch. But the Foundation League title may very well fall to the team that remains the most consistent on offense and defense and for that, I would look to the Hurricanes.

Tyrants (Orange Conference 2nd seed)
The Tyrants have remained a front runner for this season’s championship while never being a frontrunner in their own division. That’s a tough hill for any team to climb but this season’s FL Tyrants have a little extra motivation to keep them going. They could be the first-ever Foundation League back to back champions. The Tyrants General Manager, Majik, is no doubt eager to see his team cement themselves as the best once again and has done a stellar job developing a new group of players to be just as lethal as last season’s champions. The only returning roster player, TheLouzer, has been far from a loser while putting up over 1.6 goals per game, making him 2nd in the league in total goals scored. That doesn’t mean that their defense will be lacking though, as the first overall saves leader in FL is none other than Detto.

Knights (Blue Conference 1st seed)
Score more goals seems to be the mantra of the FL Knights this season. While they’re 10th in the league for least goals allowed, they have scored a whopping 157 goals, which is the 2nd most in the league. This is owed to the high-powered duo of team captain Gabronies and Whyuacow. Whyuacow is currently the league leader in scoring followed closely by Gabronies in 4th. The team may lean on the more well-rounded assist leader, Kingkris32, to facilitate plays from the backfield in the playoffs, but if the strategy of all offense all the time got them the division title, don’t expect them to step off the gas in the playoffs.

Bulls (Orange Conference 1st seed)
If I hadn’t already used my one pun, I might write something here about the rest of the league chasing the Bulls instead of the Bulls chasing anyone. This Bulls team has been the frontrunner all season long but the playoffs are a different story and the Bulls of the early season look slightly different from the Bulls going into the playoffs. The team is led by Omnikron and DarthRedRaider who have both been key to all 9 of the series wins for the Bulls. Those looking at the roster may notice a missing piece as their star scorer, VuMa, has recently ranked out. But he has quickly been replaced by someone who may be a new breakout star in WonderWulf. WonderWulf has come on to the team and scored 25 goals in just 10 games. Whatever their roster, the Bulls have combined for a +74 goal differential this season. The next highest differential is +56. The ability to maintain a stalwart defense while putting on a flurry of offensive pressure is what makes the FL Bulls a strong favorite for the championship title.

The Foundation League playoffs are one round shorter than the rest of MLE so when all eight teams kick off this weekend they will only be three wins away from a championship title. Which of these up and coming players has what it takes to win three straight series and prove they are the best team of the Foundation League this season? You can find out by catching all the action this weekend of the MLE Network!