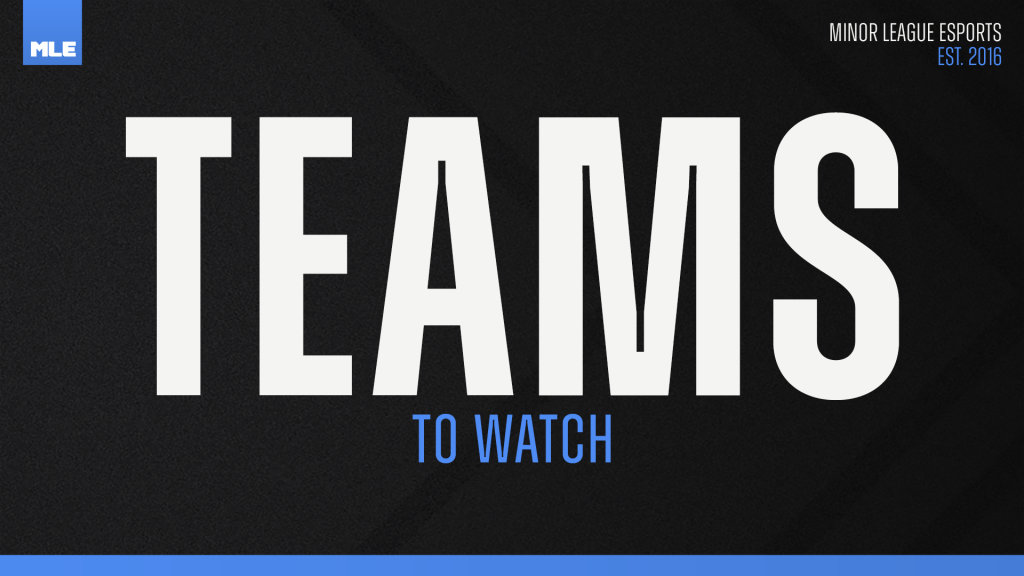 Day three of the quarterfinals brings us the final games to determine conference final matchups. We have a slate of explosive series to finish out the round and we expect each one to be a must-watch. There’s a lot to cover so let’s get to it. We’re breaking down every match that you’ll see tonight, August 1st on all of MLE’s streams.

The Comets took the mystic division title this season after a close race in 3s. They managed to hang on despite closing out a little weaker than they have all season. Meanwhile, the Flames have been heating up toward the end of the season in 2s and 3s. The Comets have one of the most lethal scorers in the league in Swanson who finished second overall in goals scored this season with 47. The Flames also have a top-five scorer in Justin4728 who has put up 35 goals in 35 games this season. These are two hungry teams that have the firepower to take the win. I expect this series to be high-scoring and likely got to five games.

The Shadow are coming into their first playoff match with a 70% regular-season win rate. As if the win rate isn’t already intimidating enough, the Shadow has consistently placed first in power rankings and are expected to do well in their playoff debut. Their star players CrazyCrow and MapleSyrup boast the 2nd and 3rd highest MVPR average in FL Standard. The Spectre are coming up against the Shadow in a tough fight, but not an impossible one. In the final set of power rankings, the Spectre jumped from 10th place to 8th – This was no surprise as in weeks 11 and 12 they managed to win 2 series. The Spectre will have to ride on this end-of-season momentum to make sure they have a chance to make it past the Shadow tonight.

They’re calling it “The Battle of the Birds.” Well, at least that’s what they should be calling this Foundation League matchup. The Puffins have built a solid campaign in 2s with consistent team play and high-scoring games. The duo of GamrWill and Frost have a team record of 22 and 8. While midseason pickup OGAssassin has brought in a possible x-factor scoring 28 goals in just 15 games. On the Other side, the Ducks battled all the way through the season to finally clinch a playoff spot with their final game, winning the seed in a tiebreaker. The Ducks are a far more formidable squad than their 25-25 record would imply, especially when playing their star scorer BallDon’tLie who has an average MVPR of 4.02 across 8 series.

The Lightning were led by Tomez’s 4.18 MVPR in a tight series against the Jets. The series went to game five but when the Lightning went up they went up big, outscoring the Jets 21 to 8 in the series including winning game four 8-0.  As for the Express, Pander was the star of the show, putting on a 3.28 MVPR showcase in a tight win against the Knights. The Express won a more defensive battle, closing out game five with a 2-1 win. Both teams had to sweat out their last matches, and this matchup should be no different. A close game is all I can think of with this series.

Both the Rhinos and Demolition had the pressure of playing last week and both teams prevailed. The Rhinos were led by Yurek and The End Of You in a shutout 3-0 victory. The End Of You led the way with a 5.76 MVPR on 5 goals, 5 assists, and 7 saves. For the Demolition, Hems and Mileunders fought a close 3-2 series. The Teamwork of Hems and Mileunders won out in the end, getting assists in 13 of the 19 goals scored. The results favor the Rhinos, but as the Demo have proven all season, they will be a mighty foe to beat.

Both the Ducks and the Lightning achieved a 3-1 victory in the first round of blue conference playoffs. Ducks’ 2s players KingDufff and EliteInferno24- took down the Wolves with a combined average of 4 goals per game. The offense these two bring will help them face their opponents in round 2 tonight. Their opponents, the Lightning, won their last round against the Express with the help of X and Goldfish. They managed a combined 3.5 goals per game last week. With similar performances in the playoffs so far, the Ducks and the Lightning have an equal chance of getting themselves to the next round.

The Blizzard blew in like a harsh cold front and sent the Ducks south for the winter in the first round. The Blizzard won in four games and none of them was more important than their 7-2 statement game to close out the series. Mizule was the clear MVP with 8 goals 4 assists and 6 saves in the series. The Jets also took their series in a 3-1 score but notably had to fend off a closer foe in the Spartans. The Spartans and Jets were dead even in shots taken, each with 31. But the Jets managed to come out ahead in goals. The conversion rate of Liotta, who went 6 goals for 9 shots, and Isaac13003 who went 8 for 15 was a huge factor in the win. The Jets will need to keep that accuracy sharp against this Blizzard team and the Blizzard will need all three players to show up for this match.

The Wolves made sure to go for the jugular in their round one match. Two games can often be high-scoring but putting up 17 goals in four games is a bit rare. Leading that shootout was Haimgame who went 12 for 19 on shots converted. Not to be outdone the Lightning put on their own offensive master class in their wildcard series. AKAIceBorg and Jrdn combined for 45 shots in four games and converted on 15 of those. Now, these two offensive-minded teams will face off in the quarterfinals and we’re sure there’s going to be a lot of goals in store for this one.  The team that wins may come down to whoever has more time in the offensive end to take those scoring chances.

The Bulls have not had the best record this season, sneaking into the playoffs with the 7th seed. But in the postseason everything is wiped clean and all that matters is the next round. The Bulls are taking that attitude and running with it. Astrologuy and ESTO seem to have found a synergy in their game and hit their stride at just the right time. Of their 14 goals, 9 were assisted. The duo was even on most stats including being tied for saves at 9 a piece. The Bulls will need that new and improved teamwork if they hope to succeed against the number one seeded Sharks. The Sharks have looked good all season, finishing with a 48 and 22 record. Water has been the primary Duos go to with 81 goals and 51 assists over 40 games this season. As for their likely partner, both Majik and Shade have had great seasons, averaging over 5.0 MVPRs. The final choice may just come down to chemistry, but either pairing will likely be a favorite in these playoffs.

The Hurricanes seem to be at their best when they’re playing shut-down defense. In their 3-1 series against the Sabres the only game they dropped was one where they let in more than 2 goals. For the other three games Squanchy, PrivilegedPear, and Goldentornado17 seemed to hold the line and win out the one-goal game. The Hawks Also kept their series close, though that was less because of a defensive mindset and maybe more of a mad scramble on the goal line to keep the Blizzard from finding the back of the net. In a five-game series that went back and forth the Blizzard put up 54 shots and the Hawks managed 35 saves. It was a nail-biting series the whole way through that tested the nerves and resilience of this Hawks team. Now we will see if the Hawks came out of that series stronger and ready to fight or if the Hurricanes will prove too much of a force for them.

Not only is this matchup a 2 seed versus the 3 but it’s a Sun Division rivalry that is primed for a close knock-down-drag-out fight. Lottly Lettuce has had yet another impressive season for the Outlaws, putting up 82 goals on 45 games. Their partner, Lazarus, has been the defensive force and passer for the duo with 115 saves and 43 assists. The Pirates have an impressive duo of their own.  Kruncho and Tater finished the season 6th and 8th on the list of most goals scored. With a 6.45 Tater has been impressive on both sides of the field and could be the MVP of the match for the Pirates. Both teams have a stacked lineup. I expect both of them to be in top form in this matchup.

Yesterday the Knights’ PL 3s team won their first playoff match through an NCP. The Knights will take the stage again tonight (hopefully) for their first real PL playoff match. We can expect to see Comp with either Ryker or Perma to take the field for 2s tonight. The Hurricanes have a big night ahead as their PL team is the last in the franchise currently in the playoffs. Championship hopes lie with ChimpanJay and whoever is ready to put up a strong fight against the higher ranked Knights. ChimpanJay is a top ten play in goals and saves. They have past playoff experience but do they have enough to lead this team against the depth of the Knights?

The Pirates will be coming to this 3s game fresh from their 2s playoffs match. Whether this doubleheader will fortify the pirates or burn them out is to be determined. The Pirates had a close 3-2 victory over the Bears in week 10. Easy, Kruncho, and Tater slammed the net with 50 shots and 20 goals over the course of the series. On the other side of the field are Ally, Zack, and Hornet. The Bears are aware of their past record against the Pirates. They have 2 sets of replays to look over and know which roster to expect. We’ll just have to see if the Pirates continue this pattern or if the Bears brute force their way through to the next round of playoffs.

This match has the honor of closing out round 1 of the Premier League playoffs. You may be wondering: Have the Jets and Blizzard already played each other? The answer is yes. The Jets 2s team took a 3-0 victory over the Blizzard 2s team yesterday. If the Jets play Wovah, Windle., and an equally strong third they can repeat last night’s performance. The series had a 13 goal differential and no close games. The Blizzard still have a chance for their own revenge – if Tagmata and Danger bring BraidedAxe with them they can lock down rotations and improve on defense. Those 3 have played most 3s league matches together; that chemistry could be the key to balance the scales with the Jets.

That’s every match happing tonight across MLEsportsgg 1,2, and 3. Be sure to tune in and catch all the action and check back for more playoff coverage as the playoffs continue.