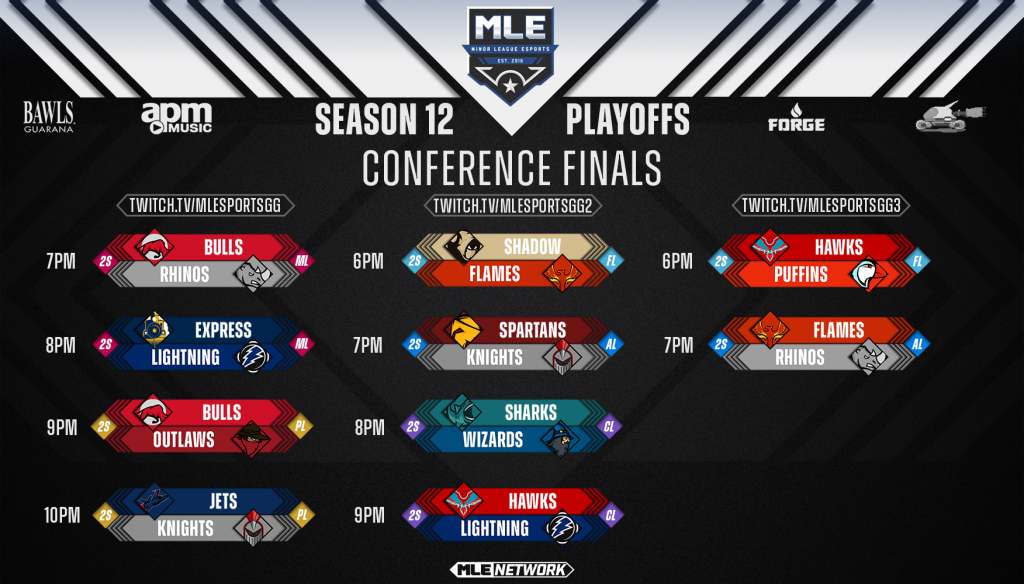 The battle for Orange and Blue Conference titles is here. This weekend teams will be battling it out to determine who wins their respective conferences. With each of these teams having played each other in the regular season, there are bound to be a few grudge matches going on, and that could make things all the more interesting when they face off again. So strap in for a wild night of Rocket League and read on to see who will be matching up tonight, August 7th, in the MLE Doubles Conference Finals.

Both the Shadow and the Flames finished their first playoffs game with a 3-1 victory. Now they meet each other in the Blue Conference finals to decide who moves on to play the victor of the Orange Conference. LogiCC and CrazyCow were a balanced duo when they went up against the Demolition last week. LogiCC had a 4.33 MVPR average for the series while CrazyCow had a 4.48 MVPR average. If both players can continue to rotate and play consistently at almost exactly the same level they could continue their winning streak. The 3rd seeded Flames sit on the other side of the field. They pulled an upset over the 2nd seeded Spectre last week and are capable of doing it again. Drocsid and Justin4728 put on a combined 35 shots and 13 goals over their 4 game series last week. This isn’t a surprise as Justin4728 has the second highest shots per game over the regular season at 4.8 SPG. The Flames certainly have the skills they need in order to take down the top seeded team. It’ll all come down to match time to see if the Flames can score to their heart’s content or if they will be stopped by the well prepared Shadow defense.

The Hawks are soaring into the Blue Conference 2s Finals after a 3-1 victory over the Foxes last week. As predicted by the editorial team, the Foxes put some serious offensive pressure on their opponents. Beepbingbongbop made 12 shots and 6 goals while Crusty Cribbits made 17 shots and 8 goals over the course of the 4 game series. Both Hawks players are a lofty 10 salary. That’s the highest possible salary an FL player can be, so it’s no surprise that the Hawks have had a strong playoffs run so far. Despite their inability to soar like the Hawks, the opposing Puffins have their own tricks up their wings. The Puffins took their first playoffs match against the Ducks in a clean 3-0 sweep. In that series, Frost made 13 shots and scored 7 goals. GamrWill’s well-rounded performance netted an average 4.71 MVPR over the 3 games. The last time the Hawks met the Puffins this season they secured a 3-2 victory. A repeat performance of that nature is possible. But with how similar these high scoring and high seeded teams are, you will just have to tune in tonight at 6 PM Eastern on MLESPORTSGG3 to see who will land in the cross-conference finals.

Perhaps it’s simply the magic of having a player named FLaMEz on the Flames roster; this AL team has never looked hotter than they do this post season. By putting up 12 goals in their first round series and 15 goals in their second round series the Flames are showing that they can turn up the heat with every game. They even closed out their series against the Shadow with a 6-0 and 2-0 win to take the series 3-2. The Rhinos aren’t a team to be phased by their opponents, however. Yurek and The End Of You have shown a consistency and chemistry in this playoffs that isn’t often seen in the Academy League. Each player seems to know where each other is at all times. Their ability to strike fast and take shots from every point of the field has left opponents flummoxed and lost on the pitch.

Like Last season’s Puffins, the Spartans are the scrappy underdog that should win over a lot of MLE fans this season. Passive Ways and SpongebobGGoober came out of the gate with a 3-0 win over the Sabres that was such a shock it had maybe the most reactions of any series reported in this playoffs. The offense of this duo was fast and efficient, converting 60% of their shots in that first series. They followed up that performance with with a win over the Aviators where the first three games were decide by just one goal. The Spartans came up suddenly and closed out the series 4-1 in the 4th game. The Knights on the other side of the pitch are looking to play spoiler to this Cinderella run and they have the game plan to do it. SirHoldSpace and KyleCornDog took down the defending champions in round one and had an impressive 3-0 sweep in round two over the Blizzard. In both series the Knights controlled the pace of the play and dominated possession. Even when they’ve let goals in it’s always looked like the Knights are in control of the series.

This Wizards team might just have a real MVP in WhippyFlippy. It took the team a bit to find their rhythm in their match against the Dodgers but after dropping game one they began to fire on all cylinders and took the next three games. Prince|E had 6 goals and 6 assists while WhippyFlippy had 12 saves and 10 goals on 15 shots. If they can keep that impressive level of shooting percentage up, they might just find themselves in a championship game. The Sharks, on the other side, played their first postseason match against a Bears team that wouldn’t go down without a fight. The series went the distance and four of the five games were decided by just one goal. The Sharks outlasted the Bears thanks to the defense of Bledsoe and Hobo1104. The duo combined made 22 saves and held their opponents to a combined shooting percentage of 33%. Both teams have been in top form and have players that can make the clutch play to take the lead. I expect this to be a back-and-forth series that goes the distance.

The Lightning has breezed through this playoffs in a flash. They managed to get through their first two series by only dropping one game. Over those two matches, Ex has averaged a 4.49 MVPR while Goldfish averaged a 5.37. That is a dominant combination for a duo that came into playoffs as a three seed. This team now faces the number one seed in the conference. Despite this seed difference, I don’t see the Lightning being phased by a team with a better regular-season record. That Number one seed, the Hawks, took care of business in their first match last weekend. They took a 3-1 win over the Spartans that showed how efficient the Hawks are at shutting down an offense. Squintle and Pomwonderful combined for 11 goals while holding the Spartans to just 6. Notably, the Hawks managed to keep Rine of the Spartans from sinking a single one of their 17 shots. I expect this to be a showcase of one team’s dominance in controlling the pitch. Look for the first game to set the tone in this series.

The battle of the Cinderella stories is taking place in the Orange Conference. One of these teams will have a chance to compete for the championship title despite neither of them having won their own division. The Bulls got here by plundering a good Pirates team and then spearing a deadly Sharks duo. Both ESTO and Astrologuy have averaged over a 5.0 MVPR across both postseason series. But it was ESTO who showed up huge against the number one Sharks team in a hard-fought five-game series. Esto had 14 saves and 14 goals, making a convincing argument for an MVP title. The Rhinos have had an impressive run of their own in the first two matchups. Ellectrozx and TmanRL took a 3-1 win over the Spectre in the first round, outscoring them 18 to 12. They then met an offensive Elite team in the second round and showed that they can win against even the best offenses. The Rhinos outpaced the Elite’s 39 shots with 45 of their own. Expect this series to have a lot of fireworks as these two team give it their all to prove why they deserve a chance at the title.

The Express have made it to the playoffs by having a solid roster who won series consistently throughout the season. Now that they’re in the postseason they’re showing just how much of a strength having a deep bench is. In their first series, Botato and Pobbi3 combined to put up 13 goals in a 3-1 win over the Aviators. In their second series, Luke_ stepped in for Botato and Popped off for 13 goals, 4 assists, and 9 saves in a 3-1 win over the Knights. If one of these three can’t take the pitch this weekend it won’t affect their chances for a win because each of them has proven lethal in the playoffs. The Lightning, not unlike their Champion League friends, have taken two series in convincing fashion. The defense of Jrdn and AKAIceBorg has been outstanding to watch. Holding teams to just 13 goals across two series shows just how consistently this team can shut down their opponent’s offense.

The Outlaws got to take the pitch for round two against their rivals, the Pirates, and show off the talent that’s on this Outlaws roster. Lazarus and LottyLettuce made an argument for why a defense strategy in twos is so powerful. They were happy to absorb the pressure of the pirates, putting up 33 saves in the process. When they had chances on offense they converted with precision and were rewarded with winning enough low-scoring games to win the series 3-2. How this tough defense will fair against the high-powered offense of the Bulls is another story. The Bulls have only lost a single series this season and that is largely owed to the offensive output of Evil and returning PL champion, Deluxe. Deluxe won last season with a team based around standout solo plays and aerial attacks. That could be the formula for repeat success. But to win that Championship for a second time the Bulls will have to get past LottyLettuce who is surely looking for revenge after falling short last season.

It’s hard to believe that a team with Comp on it is the underdog in any matchup but the talent of the Premier League playoff teams has reached a new level this season. That doesn’t mean that Comp hasn’t put their stamp on the playoffs this season. They managed to put up 5 goals and 4 assists in a 3-1 win over the Hurricanes last weekend. The Duo of Perma and Comp had a slow start, getting shut out 1-0 in the first game, before waking up and returning to their Knights playstyle of high octane offense. They closed out the next three games 4-3, 5-1, 4-1. The Knights now face off against the only team who has thus far proven they can throw a wrench into their game plan. This Jets duo of Wovah and Windle not only beat the Knights in the regular season but did so in a 5-0 sweep. It’s notable that Perma was not in for this matchup so I wouldn’t write off this rematch so quickly but the Jets looked phenomenal in their first playoff match last weekend. Wovah and Windle dominated blizzard in a 3-0 sweep, both averaging over an 8.0 MVPR in the series.

As we draw closer to the finals every match looks to get tougher to call and will no doubt be more explosive. Every player will be fighting to prove their team is the best and only the true stars of their teams will be able to rise up and overcome their opponents. It’s sure to be an exciting weekend so tune in to our twitch channels to catch all the action and check back here for more playoff coverage.