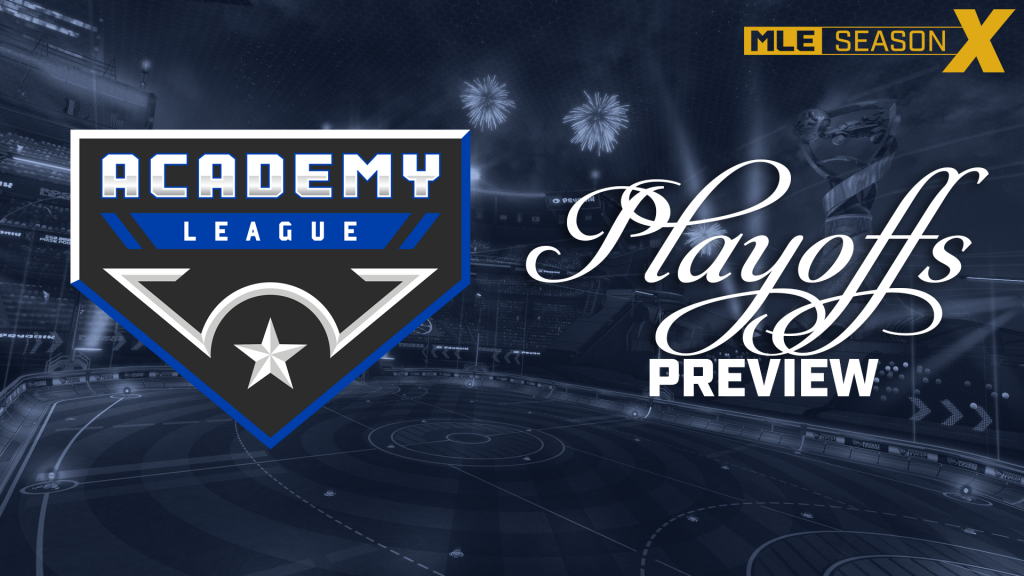 It’s everyone’s favorite part of the season once again. The dust has settled on the regular season and the best teams will be battling it out for the title of Season 10 Academy League Champions. With the adjustment of salaries for this season of MLE, the Academy League will now feature Champion ranked players among the rosters fighting for the AL title. This change has not only risen the style of play but the competition among teams that are hungry to win it all. To help you get excited for the MLE Playoffs, I’m here to break down the teams and tell you why each team has a shot at the final.

Wizards (Orange Conference 7th seed)
A late-season change can make or break your team come playoff time. In the case of the Wizards, all eyes were on the recent pick-up, Legit in week 10. Before ranking out, Shult was a powerful offensive force for the Wizards with over 2 goals per game and also served as an outstanding facilitator showing off an impressive .8 assists per game. Mario_RL, TourneyEarnie, and Krihg have all been dependable for contributing to the Wizard’s winning record. But they needed help from Legit to get the 4-1 win over the Demo and clinch a playoff spot. Now GM LilRock has to decide if he will ride the hot hand of Legit and TourneyEarnie or look to one of the other starters to step up and pull off an upset on what the Wizards are hoping will be a cinderella run at the title.

Lightning (Blue Conference 7th seed)
The Lightning were tested in their last three weeks of division play but when they needed it most they managed to pull together a 4-1 win during week 10 to clinch a wild card spot. The team has had an up and down season to get into the playoffs. They’re the only playoff team with a negative goal differential. But with an 8-6 series record, they’ve managed to give themselves an outside chance at a playoff run. To make that run they’ll likely lean on DC9708, who leads the teams in scoring and defense. DC averages 1.4 goals per game and 1.8 saves. Those are impressive numbers but are they good enough for championship MVP?

Puffins (Blue Conference 6th seed)
Teamwork makes the dream work in the AL Puffins squad. That’s the mantra that team captain AubreyE has led this squad while putting up a league-high 42 assists. The rest of the team has followed suit and ElCuchinero Cuh also placed 6th in the league for assist with 32. This style of play no doubt helped them score a shocking sweep over the Wolves in week 10 to snag their wild card spot and clinch the 6th seed in the playoffs. But if the Puffins want to continue a run of upsets, they’ll have to turn to GM and leading scorer B1 to stay on track of averaging at least 2.1 goals per game.

Elite (Orange Conference 6th seed)
The Elite squad seems to be building up steam as they head into the playoffs. Their first few weeks were rocky, getting off to a 4-4 start. But they finished the season on a six-series win streak, capping it off with a statement 5-0 win against their division rival, the Bulls, to lock in a wildcard spot. A +32 goal differential isn’t as convincing a number when compared to some of the AL favorites. But their star players Rebel and Frawd have both ended the regular season with an average MVPR of 4.57. With the current form of this team, it doesn’t seem right to call them underdogs. Can they continue to show they’ve shed all memories of their shaky start and keep this streak going all the way to the finals?

Jets (Blue Conference 5th seed)
The Jets are another team that has been helped into the playoffs by a late-season pickup. The new starter, Sangy, has put up 16 goals over 10 games and helped his team to a 5-0 in the last week to clinch a wild card spot. The newcomer will be tested in the playoffs, however, as they face tougher opponents and stingier defenses. None of the remaining starters have an MVPR over a 4.0 so they’ll be looking for someone to step up if they’re going upset opponents. But the good news is for as much as the Jets look like the underdogs, they have found a way to win series.

Outlaws (Orange Conference 5th seed)
The Outlaws lost a tiebreaker for the division title. That alone doesn’t look bad until you see that they lost it by getting 5-0ed by their division rivals and eventual winners, the Rhinos. But the Outlaws still have weapons that could help them bounce back in the wild card round. ITSLAPPY is third in the league in saves, leading a defensive-minded team. The other half of the likely duo is team captain PAV3K, who averages 1.57 goals per game. The Outlaws are looking to get back to the finals after winning the AL title in season eight. The Outlaws GM, Stovvads, knows that if they want to get back to the title game they need both defense and offense to get them there.

Comets (Orange Conference 4th seed)
It was a close race for the Mystic division title this season. The Comets were able to scrape out a win thanks to having the 5th highest-scoring offense. To say that MattyIce2110 is their star player might still be an understatement. Having the number one scorer in AL with 110 goals in 40 games is enough to make any opponent afraid of playing the Comets. Add to that he has 7th highest number of saves and you have the makings of a league MVP frontrunner. With RWB being the AGM as well as an Academy League starter, it’s unclear if he will play. But whoever ends up being the other starter in the duo will have a very important job, get the ball to Matty-Ice2110.

Foxes (Blue Conference 4th seed)
Team turnover in the league is natural throughout a season. Often a star player leaving can cause a slide at the end of the season. But the Foxes have managed to hang on to the division spot thanks to strong leadership and good scouting. Tyler remains their star player with the most experience and, at a 4.10 MVPR, is a well-rounded player who could be key to winning in the postseason. The only question is, who will the Foxes choose to help Tyler make a run? With Khaos only playing a single series but putting up 10 goals in 5 games, he may be the secret weapon the Foxes need.

Rhinos (Orange Conference 3rd seed)
There are two types of stats. There’s putting up a lot of saves because your team is constantly on defense, and there’s putting up a lot of saves because your defense is a brick wall. I won’t oversell you on the Rhinos and say they’re a brick wall. But the Rhinos have put up impressive defensive numbers as a team and that team defense has resulted in the lowest goals allowed in the league. The team averages 1.27 saves per game with team captain IMichael putting up 55 saves and 76 goals on the season. With IMichael, the team has scoring potential, but it’s clear that the Rhinos start their plays from a strong backfield.

Express (Blue Conference 3rd seed)
Is this a good time to say that I like the Express? I like their star scorer, CommanderSushi1. I like their GM, C0P3X. I really like their hype videos. What I don’t like is their series record in AL this season. They somehow managed to win their division with 7 series losses. It’s a team that appears on paper to be able to win matches but has struggled to close it out in games. Still, with Sobes tied for 4th in the league for assists at 34 and CommanderSushi being second in league MVPR with 6.01, this team has the tools to win. They just have to show they can close out a best-of series when it counts.

Hive (Blue Conference 2nd seed)
There’s a lot of buzz around this Academy League Hive roster (contractually, I get one pun per article). But when a team has two players in the top 15 in goals and a top 10 player in both saves and assists it seems appropriate. This team is top-down full of well-rounded players that could pop off in playoffs. With DLEW19 as a GM and Academy starter, he has put together a team that is one of the favorites to take home a championship. And with star defender Black putting up 1.9 saves per game, they have a solid duo to take on any team.

Tyrants (Orange Conference 2nd seed)
Let’s just run down a checklist for the Tyrants real quick. Top two scoring team in the league? Check. Three players with over 4.9 MVPR? Check. An English player? Check. An Irish player? Check. A player with food in their name? Check. That’s a solid checklist for a team making the run for an AL title  Gogurt is third in the league in assists with 39. If Gogurt is the playmaker, then GameStrike208 is the shooter. Averaging 2.1 goals a game, GameStrike208 has the accuracy to put in the passes that Gogurt feeds. That’s a formula for a championship-winning duo.

Hurricanes (Blue Conference 1st seed)
The Hurricanes seem to be a lot like their Blue Conference companions, the Hive. They both have a stacked group of well-rounded players. They both put up solid 50+ goal differentials during the season. They both start with H. But what the Hurricanes have that the Hive doesn’t is Soop Feared. Soop has the second-most goals in the league with 88. The Hurricanes also boast a stalwart defense with Soop Feared and Krosis averaging 1.7 and 1.8 saves per game respectively. A star offensive player and a good defense are enough to help you win against any opponent. It’s a combination that could carry them all the way to the title game.

Flames (Orange Conference 1st Seed)
It’s a tough road to be the top team in the league. It’s even tougher to go all the way through the playoffs and win a championship. If you’re going to do it, it helps if you’ve done it before. The Flames are looking for their second AL championship in a row and it looks like they have just the team to do it. They’re the highest-scoring team in the league, finishing the regular season with 251 goals. Bippers and Vague are the likely pairing to take the championship. Bippers finished 2nd in assists with 41. Vague leads his team in scoring with 69 goals over 35 games. The one-two punch of these two players has helped the team finish with a nine-game winning streak. That’s a lot of momentum that this team could use to carry them to a 2nd consecutive AL championship.

The Academy League playoffs are sure to be a wild ride. Will we see an underdog make a shocking run to the grand finals? Will there be a two-time champion franchise in the Academy League? Will we see a dark horse player make an incredible run and take the title? Whatever happens, it’s going to be an event you can’t miss. Be sure to tune into the MLE Network this weekend! The action starts from 6pm ET on mlesportsgg2 and from 7:30pm on mlesportsgg Saturday & Sunday!