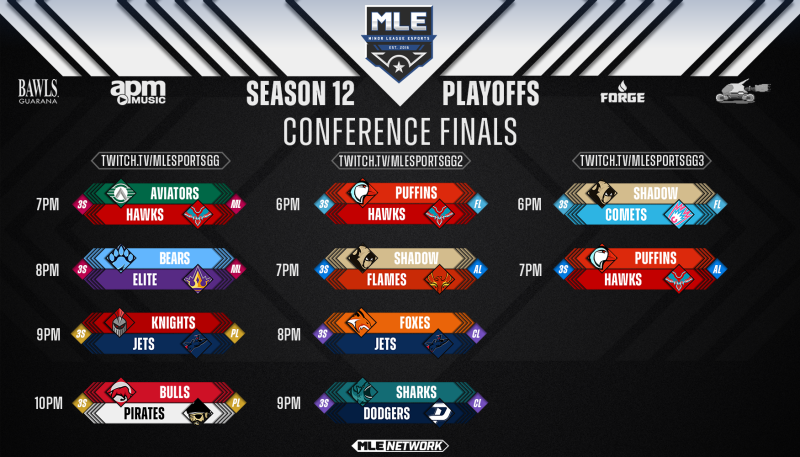 The Conference Finals return for day two and this time it’s the 3s rosters that are taking the field. This is the first season that MLE has had a standard mode so whoever wins today will be the first-ever MLE conference champions in standard mode. We have ten series across five leagues and each one looks to be a great match so let’s break down each match happening today, August 8th in the MLE playoffs.

The comets and the Shadow both made quick work of their first-round series. Now the two teams face off to determine who is the best in the Orange Conference. The Comets closed down the flames with a stellar offensive showing from Swanson, who scored five goals in three games, and great defense from the whole team. The Comets held the high-scoring Flames team to just two goals on the series. The Shadow looked to their passing and team play dispel the Spectre squad. six of their nine goals were assisted and four of those assists came from Logicc who has been a playmaker for the Shadow all season long. Though they both seemed to breeze through the first round, this second test will not be an easy one for either team. I would expect this best of seven series to go to at least a game six.

The Hawks soared over their division rival Aviators in the first round, perhaps exacting revenge for losing the division title in the regular season. Beepbingbongbop was the team MVP with eight goals and four assists. None of the Hawks team put up that many saves on the three-game series simply because they didn’t have to spend all that much time on their own defensive end. The Aviators only managed 12 shots on their opponents and of those the Hawks only allowed four of them in. In the next round, the Hawks face off against the Puffins. The Puffins have looked better and better each week heading into the postseason and their first round of playoffs was no different. They dispatched the Sabres in a 3-1 victory that further cemented their argument for the top of the Arctic division. The last time these two teams met it was the Puffins that bested the Hawks 3-2. Will history repeat itself or will the Hawks take another high-flying opponent out of the skies?

The Flames have been absolutely white-hot during this playoff run. Largely in part to their FM ironically named FLaMez, as well as BinkyBoppin and Crazy. In the last round, they were able to sweep the Elite and show just why they appear to be the team to beat in AL. The Shadow, on the other hand, are out for revenge. Last week was a tough battle for the two teams in 2s which ultimately saw the Flames taking the series. The Shadow’s leading star through their playoff run has been ClayHD, who has put on a defensive clinic in 3s. Ultimately, there are a ton of storylines leading into this game. As shown by their 2s match a week prior, this will be an exciting game.

The Lightning have bolted on to the scene in large part to the play of Aatxe. His mechanical ability and scoring prowess was put on full display in their series against the Express, where he racked up 5 goals and an impressive 3.68 MVPR. ThunderTung and Tomez have also been great in the second line. The team chemistry these 3 have displayed shows why the Lightning have gotten this far into the playoffs. As for the Sabres, The Big C has been the standout player. C has not only shown his ability to build a winning team but to also lead by example on the field. In his series against the Hive, he racked up a perfect shooting percentage with 6 goals, earning a 3.09 MVPR. Darkfire and Little Sauctin also displayed their ability to help push this team to the top. Overall, this series will come down to the star player in my opinion. Without a doubt, we will see an exciting series that could go either way.

The Sharks were the only Champion League team to make it to the conference final round in both modes. Though they lost in double the Sharks still have hope in this threes squad that has been playing well in the postseason. They played a very back and forth series against the Comets in the second round, taking the first game by one goal, then pulling off a Brazil in game two before getting shut out games 3 and 4 and finally winning the final game 1-0. The Dodgers also entered playoffs in both 2s and 3s but standard seemed to be the mode that favored this squad. The Dodgers come off an impressive 3-1 win against the Outlaws. After dropping the first game the Dodgers tightened up and shut out their opponents the next three games to take the series. For standout players today I would look to Hobo1104 for the Sharks and Shraxl for the Dodgers. If either of these teams expects to win they need their top performers to put shots in the back of the net.

The Jets have gotten through two rounds of the playoffs so far but they certainly haven’t made it look easy. Of their nine games for far this season only two have been decided by more than one goal. But when the Jets need the win it’s Isaac13003 that is there to clutch out the play. Isaac13003 had 5 goals 4 assists and 7 saves in the win against the Blizzard and the team will look to them to keep up their top form today against the number one seed. The Foxes opened their first game of this playoffs with a statement 5-1 win. The Hive were able to tamp down on the Foxes’ offense and wrestle one game away from them but ultimately the Foxes walked away with a 3-1 series victory. The Foxes defense looked especially effective, holding the Hive to just 4 goals on the series. Now this number one and number two seed face off in a battle that is sure to be yet another close series. I expect this one to be a game five, OT-winner, type of series.

It’s always an unfortunate event when a team is unable to field a roster in the playoffs. The Wizards bowing out in round two was probably a strange mix of relief and confusion for the Elite. They make it to the next round but have a whole week off from competition and now have to go into a tough opponent having missed an opportunity to compete. For the fans, it means that there are some question marks around this one. Going back to week one the Elite dispensed with the seventh-seeded Outlaws in a convincing 3-0 but now the number two seed faces the number one seed. Looking at the season of Dstn, BuffaloBeast, and Deadalao I’m confident this change won’t phase them too much. The three of them have been top performers all season and will no doubt be excited to take the pitch. Their opponents will also be ready to prove they can win. The Bear’s hopes for a Championship now rest on Viglio, Hen, and Judgemental. Theor first series against a tough Flames team went all the way to game five. Viglio seems to be the player to watch with 6 goals and 11 saves in their first series. You can likely expect even more shooting coming from them in this series.

The Aviators are the last non-division winner left in the bracket and have fought through tough teams to show they deserve all the fanfare of a cinderella team. Enigma has been holding their own and proved to be a great third but it’s the shooting of Doomsucker and CheeseSandwich that has surprised opponents in the playoffs. After dropping the first game against the Eclipse in the second round the Aviators tightened up their defense and went to work making plays that set up their strikers to finish off. They won the series 3-1 after CheeseSandwich secured the winning goal in a 1-0 game. The Hawks have had to weather quite the storm in this postseason, defeating but the Blizzard and Hurricanes in two five-game series to get to this point.  Brndn, KH, and Vandy have played in both series and they notably all share that load on this team with each member putting up good numbers across the board. Though good team mentality is a great sign, If the Hawks want to stop taking each series the full length they will likely need an MVP to emerge and pop off in the next series.

In the Premier League, it’s often not enough to have a solid roster of players, you need one player to emerge as an x-factor and make plays. That player for the Pirates was Kruncho in the first round. Kruncho put up an astounding 26 shots and scored 9 goals to put their team ahead of the Bears in a series that went the distance. Tater and Taki were no slouches on offense with 15 and 14 shots of their own. This team has shown that they mean to be aggressive on offense and dominate the possession and that it is a strategy that might be the secret formula for a championship in the Premier League. Their opponents in this round have certainly had an offensive mindset to match the Pirates. The Bulls took care of business in the first round by dispensing with the Tyrants ina 3-0 sweep. The trio of Deluxe, Evil, and BasiliskRL looks like a team that is perfectly in sync. Expect this series to be a fast-paced display of highlight plays.

The Jets are maybe my favorite team to watch in the Premier League this season. The team is lead by Vitali., a player that has been a top performer in their league since season eight but has never been able to achieve that final win of the season. This trio, however, might just be the right team to take Vitali to the championship. Windle and Wovah have shown once again in their first series why they deserve to be all-stars like the other top players in MLE. Wovah particularly stepped up in the first round, putting up 7 goals and 3 assist in their series against the Blizzard. As good as the Jets are they still have their toughest test ahead of them today. The Knights squad has been dominant all season and though we didn’t get to see them in the first round due to an eclipse NCP, we don’t need first-round stats to tell you that Comp, Perma, and Ryker are a delay combination that have earned their number one seed. The Jets were the only team in the regular season to go toe to toe with the Knights so expect this one to be a hard-fought grudge match between two titans on MLE.